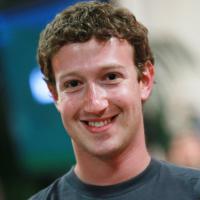 Mark Zuckerberg, Founder and CEO of Facebook, center figure in the movie "the social network", a film about Facebook's origins.
Facebook; What a powerful innovation. Facebook has the ability to share important information across our globe, informing your loved ones and friends of every event in your life in real time, and also have the ability to help organize revolutions during the Arab Spring. Facebook has turned Zuckerburg into a household name. Within an instant you can find out the latest news stories, and what your friends think about them. In the very next instant you can see pictures of your nieces, nephews, or grandchildren. You can shop and get deals or coupons, even find out the latest updates with your favorite band or TV show. So far, Facebook seems to have no limits, as every site on the internet is adding Facebook integration.

I seem to be sitting on the outside. Facebook has become a source of sadness for me in recent history.  Instead of being an inspiration, it has fallen down in my life past even being entertaining, to being somewhat of an annoyance. Before it comes off as me bashing Facebook, let me admit that not only do I still have a profile, I do log in once a day and check my feed for a few minutes, look for pictures of my nieces and nephews, friends kids, or something funny George Takei has posted. So though it may come off as me being a Facebook hater, I do realize the hypocrisy in my statement.

That being said, when I think about how people communicate, I am vastly impressed with the way technology has advanced.  Our phones now are more powerful than most of our computers. We can assess everything in the world within seconds, it's absolutely amazing. Everyone just about has a cell phone, even teenagers, you can reach just about anyone in the world in a second, via several different mediums.  I myself have several different applications on my phone that allow someone to contact me. You can call, text, email, Viber, WhatsApp, Kaokao Talk, and many more. You need me, here I am.. unless I'm in a movie, I actually turn my phone off in there!

...hilarious
Facebook is another good way to get to me, the application on my phone will send me a push notification when someone mentions me in a status, as well as a pop-up if someone sends me a message, but this ability has become a headache for me. Let's take for instance, the ability to Geo Tag someone on Facebook (that is the ability to say someone was with you at a particular place at a particular time). Cool right? Yes, but I actually DON'T like everyone knowing where I am at all times (and since I know your thinking it let me say I know i can turn off tagging but it turns it off for everything not just the geo-tags, so Facebook or anyone else if you've figured out how to turn off specific tagging you let me know), and as I will mention later, people actually create drama off of me being tagged on Facebook. "Hey, you went [there], why didn't you invite me? what you don't like me anymore?" Come on people. I don't mind the photo tags, I run my life under the assumption everything I am doing is being video tapped and photographed anyway so I try not to do anything I wouldn't want tagged on Facebook.  Yes I realize its weird, I don't mind you taking a photo of me at a place and tagging it on Facebook, but if you geo-tag me it bothers me, the former bothers me a lot less than the latter, and for the most part people wait a couple days to post photos of you, or at least you know the picture was taken, I often don't find out about the geo-tag until the next day (or from a angry phone call minutes later).

I wont write a long paragraph for this topic, but if I get poked by a zombie wanting me to help him with farmville while playing candy crush, I'm going to punch him right in the gut. Moving on.

As I mentioned earlier, you can see what everyone is doing just about everyone is doing every minute of the day, again, cool right? Depends. A lot of people (my friends I suppose) use Facebook to tell us every little minute detail about their day, even the irrelevant ones. And I'm not saying irrelevant to me, I'm saying irrelevant. the knowledge that its "hump day, woot woot" is not relevant, I have a calendar, I know what day it is lol. "Oh yeah, what about your updates ben?" Great question. I STILL maintain pride in the things I post to MY wall. I have extended many a challenge to people to go look at what I put on my wall. The last thing I posted was a CNN article in which i was featured (ok I also uploaded the article, still pretty cool), other than that, everything is pretty much funny conversations, mostly with my dad, maybe not 'relevant' to everyone, but entertaining at least. I know I can modify my setitng and remove those whose posts I don't want to see, and i ask anyone to please block me if they don't find me entertaining by all means, but I just haven't had the time to big my account that much scrutiny. 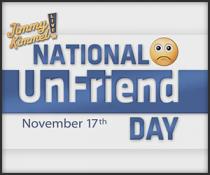 Do you watch Jimmy Kimmel Live? Don't, he's terrible, but every November he does offer up a very good suggestion, something he calls "National Un-Friend Day", where he proposes that everyone take the day to go through their Facebook friends list and un-friend the people you don't know, don't want to know, and don't want to hear from. He has even invented a convenient scoring system in case you are not sure how to identify these people, you get points for everything from taking "selfies" multiple times, and posting updates that involve your cat chasing strings. Epic. I have partaken two years in a row.

So let me sum up my little rant here. Facebook, you have your flaws, as everything in life surely does. I can use you to do the things that I need to, and quite efficiently I must say. You are one of the greatest things to happen to the technological world so far, everywhere I go on the net I see the "login with Facebook" button, as well as every game I download on my phone. The argument can be made that your good out-weighs your bad and you do add something positive to the world. In the end though, I have to say that both the good and bad of Facebook cannot be contributed to Facebook itself, but to us, the people. Places like Facebook have provided humans an outlet for every emotion, expression, and thought, how we use this tool is up to us in the end, and that puts the power with us, and we all know that "With great power comes great responsibility". We all aren't going to use this power in a way everyone else we know is going to like, but we can all (even me) take a moment to sit back and ask what we are using Facebook, Twitter, etc. to do in our lives, and whether or not it is the best use of our time. As I am sure the audience for this little monolog will go unheard, as I will not be posting this to Facebook, and most of you have stop reading by now in order to go see new updates on Facebook, I hope my message is somewhat clear, as with everything else in the world, the power lies with us as a people, and it's time we take a cue from the Arab Spring and use these tool as a harness for good, use these tools to let the world know, the good people not only exist, we are ready to make sure good things prevail.

So here is something controversial. I saw you posted this Arwa Bint Muhammad yesterday and then I saw my friend Woman 1 share this. Thoughts anyone? males and females :)

Popular Tags
xkcd    B    life    chat conversations    40 before 40    dragon con    failing    brightline    diet bowling challenge    diet    Star Wars    Fat Smash Diet    tracking    dicipline    wedding    motivation    redbox    movie review    weight watchers    Things I shouldn't have eaten    anchor    scales    weight journal    bowling    tuesday tips    funny    activeLink    comics    disabled    women    weight loss
What Will I Read Here?
Most of my blogging has to deal with weight loss, if you can tell from the tag cloud above. I didn't want to use my blog to just be like "oh, here is what I did over the weekend," my life isn't that interesting. Instead I began this blog in hopes of expressing a lot of the thoughts I have about my own life and life in general, as well as share a lot of the humerous things I see out on the net including chat conversations. This blog might seem random and all over the place but serves as a great deal of inspiration not only formyself, but it would seem for a few others. If you have come here I hope you are either inspired, or at least entertained. Enjoy!