Minorities and Women in Star Wars


This past weekend I attended Dragon Con, a conference in downtown Atlanta for us nerds. I didn't go to many panels but I did attend a panel called "Where are the women and minorities in Star Wars", which I found to be interesting.  The panel discussed the current role of women and minorities in Star Wars, any future involvement by W&M1 in Star Wars, as well as "alternate universes" had certain characters in the franchise been a woman or different ethnic group. 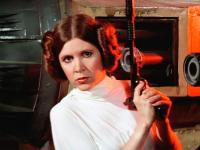 The first image that came up when searching for princess Leia, thankfully NOT the golden bikini
As typical of any discussion involving race, I was really intrigued. The discussion eventually got "off topic" to the point where we were discussing the systemic causes of the lack of W&M in media in general, and how the perceptions of W&M in society would have to change in order for there to be some equality on film as well.  We noted how in comic books and movies, if there is a lead female role, she is always very busty, gorgeous, and showing a lot of skin. Staying within the realm of Star Wars, let us look at Princess Leia, who, especially at the time of the movie release (1972), was a strong role model for women. A headstrong woman who didn't take a lot of crap and was willing to stand up for what was right.  She made it very clear she didn't need a man and was very capable of handling everything on her own. One of the panelists noted how inspirational the character was to her and how it helped shape who she is today... that is until the release of Episode 6: Return of the Jedi.  (SPOILER ALERT: although if you haven't seen this film yet, something is wrong with you and you probably don't get half the things on my blog anyway) In this third outing of the iconic franchise, only a few minutes into the film, our heroine is captured by Jabba the hut and is forced to be one of his slaves and wear the "golden bikini", a scene/image that just about everyone is familiar with today. The panelist noted how after that film, that was the lasting image that everyone was left with in their heads of Princess Leia, in a bikini. It seemed to have really upset her and I can see why.  If the lasting image of every black man on film was them stealing a car, I'd be upset too.

Baddest man in the galaxy
As far as minorities in the original series, we have Lando Calrissian, who, in this bloggers opinion is definitely the baddest man in the galaxy! (Billy Dee was actually at DragonCon this year but it cost 40 bucks to get a picture with him. I like him, I guess just not that much lol) You also have Mace Windu, one of the members of the Jedi Counsel. While Mace Windu was a respectable good guy, Lando was a gambling man turned into the administrator of Cloud City (a job no doubt he won in a card game soon after loosing the Millennium Falcon), who sells his own friend up the river.  In earth time, the portrayal of these characters are roughly 25 years apart. Could the drastic change in the primary African-american role be due to a change in times or possibly pressure on the studio to have a positive black role model?

Furthermore we discussed the lack on inclusion of the other minority groups, Asians and Latinos specifically. There were no major roles given to either group in the Original trilogy, and sub-major roles given to Jimmy Smits (as Bail Prestor Organa of Alderaan) and Temuera Morrison (as Jengo Fett) in the second trilogy. Did this lack of representation lend itself to the lack of support by those communities? Is this lack of representation due to the lack of support by those communities? Star Wars (as if it were an entity able to defend itself) could also note its diversity in alien life forms. Different aliens from all over the galaxy can be seen in the film (in the cantina scene alone), does this "diversity" make up for the lack of actual diversity? Can you use computer generated and puppet aliens as a substitute for not using real people from different backgrounds?

The discussion then turned to what-if's. What if Luke Skywalker, for instance, had been a Afrian-American in the original trilogy, how would that had effected the franchise? Aside from the obvious revelation that both Anakin Skywalker and Princess Padme Amidala would have had to have been African-American as well, would dialog have been changed? Entire scenes? The films cult following and effectively the net gross income? (and I mean all of those both positively and negatively. I.E. the movie could have grossed more and had a bigger cult following.  In the comments below discuss, and also discuss who would have been a good cast at the time for a black Luke and Leia).

One of the panelists was a professional actress. She discussed her disdain for casting calls only for "Caucasian" females. She implied that she attends those auditions anyway and hopes to "wow" them all the same. I thought that was really awesome.  Sometimes, even though a role calls for a particular "look", a different look can be substituted for flare or popularity. For instance, Queen Latifah starred in the movie "Last Holiday", a remake of a 1950 British film where the star role was given to a white male. The 2006 version grossed $7 million under budget. Could the 'failure' of this film be tired directly to the conversion of the main character to a black female? Would the movie have been more popular if the lead role was kept a white male? Another British comedy that was remade recently was the film "Death at a Funeral". While both films had very similar dialog and plot (substitute a few racial jokes by Chris Rock and Martin Lawrence), the American version hit a much different demographic by replacing the core cast with African-Americans. As I often do, I take many small polls amongst my friends and record the data in my head, and from my "studies," very few of my white friends had even heard of this remake, let alone seen it.  With an almost all black cast, this movie almost completely stuck to its core demographic, much like almost all Tyler Perry produced media. So the question still stands, how do we hit all demographics equally? Is it cast alone or is there a subject matter that is equally appealing to all groups?

Will smith and Kevin Klien in Wild Wild West, 1999
I brought to the group's attention, specifically, the movie "Wild Wild West" (1999), which stared Will Smith as the lead role of James West, traditionally a white male. The movie was met with a lot of criticism and scrutiny, and subsequently failed at the box office. When asked why he felt the movie failed during an interview, Will Smith sarcastically replied that the writers didn't know that "Jim West was notorious for being white." While a hilarious quote, Smith is hitting on the subject at hand. Could the failure of this movie be directly tied to the decision to cast the lead role in a different ethnicity than originally intended? During the discussion of this specific movie, we began using the terms "hit the mark" and "miss the mark", more specifically, when the studios "miss the mark" does that lend to them not wanting to try casting lead roles to females and minorities? Much like the president of the United States, sometimes too much blame (or even credit) is given to the person for the success (or failure) for a particular event.

Moving forward, what can Hollywood, and the Star Wars franchise specifically, do to engage more audiences and improve up the role of women and minorities in film? Well, as usual, I said all that to say this.

I love Star Wars. It's one of my all-time favorite film series. When I watch Star Wars, I don't gravitate to Lando Calrissian more so than other characters. Generally speaking, I don't do that with media at all; could be a sign of the times, or could be that I tend to gravitate towards people in life and fictional characters that I want to be like, and never have seen my skin color as a barrier to that goal. Now, as an adult, I am well aware that (sadly) situations still occur where ones skin color can become a glass ceiling, keeping one from achieving his or her goals.  Speaking specifically on Hollywood, as long as studios primarily cast white males as the protagonist, W & M will continue to "suffer", but until society changes its perceptions of who can be your "hero", segments of society will continue to follow suit. Hollywood could try and be a pioneer in this area and try to change the hearts and minds of people, but with their focus being on dollars, I do not see that happening anytime soon. The central cast in the Star Wars franchise will continue to be white. You can say because its already "cannon" and therefore you can't change it. The fan base the franchise needs to keep, the "fanboys", will not allow it. As the Star Wars universe continues to expand (pun intended) there will be more W & M added, and hopefully grow the fan base more than it already is, giving this blogger more costume choices come next Dragon Con. If we are to see a change in our society's perceptions of W & M, it is going to have to start somewhere. I challenge Hollywood to be that start, and I'm not talking Tyler Perry films or any movie with all-black casts. We need to see dominant male roles in non-historic movies. During my parents childhood they always had a dream of one day having a black president. Well, this nerd has a dream of seeing a well-received and accepted black Superman in his lifetime.

1. I will refer to the phrase "Women and Minorities" as W&M for the rest of this blog.